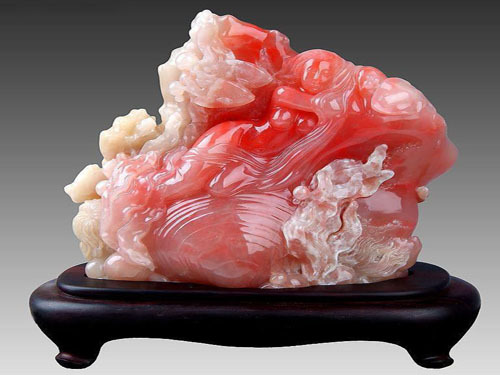 A piece of paper resembling crumpled paper and a red leaf attracted the attention of reporters. If you look closely, you can see or imagine or abstract the human body.

â€œI named this piece â€œThe Leaves of Autumn.â€ The red leaves are the most beautiful time for the leaves, but it also indicates that the leaves are going to die; in the life of paper, crumpled paper will also disappear. This work is borrowed from The physical manifestation of youth is death and the performance disappears.â€ Qiu Danhua interprets his creative ideas in this way.

Compared with this modern and contemporary work, "Dunhuang Story" makes him proud. In 2007, Qiu Danhua won the Gold Medal of the "Chinese Famous Stone Carving Art Exhibition" with his "Dunhuang Story". Today, "Flying Sky" has also become a symbol of Qiu Danhua.

In the 90s of last century, Qiu Danhua and his friends established an artist community called "The Ten Cultivators." The ten-tone "harmony" of "stone" and "ten cultivator" also have the meaning of diligently working on stones. "We advocate 'creation-oriented', that is, do not do something repetitive, and strive to make the work creative, or based on the characteristics of the material itself to create. Now, I still practice this concept." Qiu Danhua said in In the era of market economy, for folk crafts, how to find a balance between commercialization and cultural values â€‹â€‹is also a topic that creators need to think about.

â€œIt is normal for folk crafts to be affected in the commercial society. An industry will prosper and it will decline. This is the law of nature.â€ Qiu Danhua said: â€œI think business is a good thing. Without business, our lives cannot reach the present Quality, but business also destroys a lot of things. For artists, solving survival issues is also very important. Therefore, the market will have a guiding role in artistic creation."

Earlier media reports said that among the 518 first national non-material cultural heritage items listed by the State Council, only Shoushan Stone was designated as a special gift for the 2008 Beijing Olympic Games and became a licensed commodity for the 2010 Shanghai World Expo. Shoushan stone carving in the status of arts and crafts is evident.

However, Qiu Danhua believes that at present, there are some problems in the Shoushan Stone Market. On the one hand, there are many kinds of Shoushan stone, each with its own characteristics. However, at this stage, the Shoushan Stone Carving created by bright, condensed, transparent materials is more competitive in the market. In the long run, it will easily lead to cultural and aesthetic limitations.

On the other hand, the current Shoushan stone carving creation is relatively concentrated in the seal creation. This is because for the merchant, the seal has a market prospect and is easy to sell; the artist's engraved seal has less energy. However, culture is very important because of its diversity. Art works should also be diversified, and they should focus on creating seals. In the long run, they are not conducive to the development of Shoushan Stone.

In order to encourage arts and crafts workers to inherit and innovate new techniques, protect and promote the inheritance and development of arts and crafts, our province has introduced a series of related policies in recent years. For example, it supported the establishment of the first batch of 100 "Fujian Provincial Skills Master Studios", and gave each "Fujian Province Skills Master Studio" project grants of 50,000 yuan.

In this regard, Qiu Danhua believes that â€œfunds investment in the production process is a must, but personnel training is still the most important. We must cultivate talents with innovative capabilities and local cultural awareness. Only practitioners have the imagination, curiosity, and ideals. , qi and learning, arts and crafts can be better inherited and developed."

We are customized Tie Clip, tie clip and cufflink gift set, brass tie clip according to your design, size, color . It`s made by zinc alloy, iron, brass and so on. Used for decoration of Tie. In order to make the tie looks be more tidy, people usually choice this accessory. The process of this item could be stamping or die casting. Plating some color on it comes popular, such as gold, silver, nickel , copper, bronze and so on, Mens Tie Clips are depend on your specific request .